Have you ever run into file saving hell 🔥? Git to the rescue 🚨.

Have you ever run into file saving hell 🔥? Git to the rescue 🚨.

You started with good intentions, telling yourself you'd stick with an organized system of v1, v2, etc., but a couple spelling mistakes, and recovered files later you've got a file system like the following: 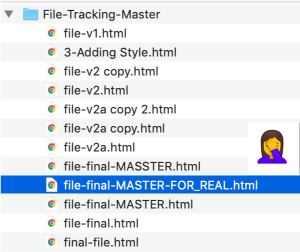 You're not alone. This problem is universal: developers, grandmas, your mail-person, anyone who has touched a computer. Thankfully, software platforms of all sorts have come together to create a variety of solutions.

Web Developers are especially demanding when it comes to version control. They are continually making small tweaks, revising, sharing code, and looking at changes done to code in the past. Today, Git is the technology that developers use to solve for their onerous version control needs.

Git is open-source, meaning that it is free to use and may be redistributed or modified. Released in 2005, Git become popular very quickly and had wide-sweeping impacts on the programming community. There were Version Control Systems before Git came along, but Git's unique approach to tracking changes was an industry game-changer.

There has been and still is no real competitor to Git. As a future Web Developer, you will need to know how to use it.

In this article, I will briefly look at the history of version control systems, highlighting what makes Git special. This will be followed by a "speed-dating" type introduction to a simple Git workflow.

I go into much more detail on Git and GitHub in the book 📗"How to Become a Web Developer: A Field Guide."

We've all been there. You saved a file on your computer, but accidentally removed something you wanted to keep. Maybe you thought ahead and have a previous version of the file you can search through, or more likely you didn't. Version management sucks and its suckiness grows exponentially larger when you're a developer working on a huge codebase.

Developers have been trying to solve for the version control nightmare since there started being developers. Working on codebases present several consistent challenges, regardless of the size of the codebase or the number of people working on them. These are - generally - as follows:

At first, developers tried to solve some of these problems with simple Version Control Systems (VCS). These were OK, but they only helped developers keep track of files that had changed. They didn't solve for any of the other issues mentioned above.

Additionally, these VCS were local. Meaning the whole codebase was on the developers' machines.

Local VCS also didn't come close to solving the issue of different developers collaborating on the same codebase. If the code was on your computer, how could you easily share it with another developer?

Co-worker: "Hey, Bob, can you email that file version again? I think it's from the change you made on Friday, but I can't be certain. I know you already sent it, but I'm too lazy to look. Thanks!"

I would too, Bob.

Next came Centralized Version Control Systems (CVCS). CVCS improved upon the process enough that they were the industry standard through the 90s up until Git was released.

Unlike VCS, CVCS stored the codebase in a single place, not on individual computers. Whoever needed to work on something would check out that file to work on it; similar to checking out a book from a library. The problem, what happens if the place with your codebase burns down, or the library floods?

Co-worker: "Hey, Kat, did you hear there was a massive hail storm in Aurora, Nebraska. They recorded 7-inch diameter hail! Isn't that where we have the computer that holds all of our code?"

I would too, Kat.

The third times a charm. Building off of VCS and CVCS, developers created Distributed Version Control Systems (DVCS). Git is a DVCS.

DVCS also allow for branching and merging. Branching here means to duplicate. With Git, this often means you are duplicating the codebase you are looking at. You make a branch - a duplicate of the codebase - then you make changes on that branch. Merging comes in when you want to merge the changes on your branch back to the original codebase.

Co-worker: "Hey, Ivan, we made a change a year ago, and I think we need to merge that change back into the codebase. Can you help me?"

Ivan: "We can do it, no problem. Go learn some Git, and you can do it sans my help."

Ivan's a bit of a jerk for not helping, but at least he's not quitting.

There are two main ways to use Git. Through your terminal, or a Git GUI. I will encourage you to use the terminal.

We will cover GitHub in tomorrow's article. I am having you set up an account now so that you can enter your GitHub credentials during the installation process of Git.